Meet the stars of A&E's Paranormal Cops TV series at the Haunted Brumder Mansion
Come for a night of fun Meet and Mingle with the A&E Paranormal Cops we will have Ron Fabiani, Tom Froelich, Pete Shlelich and Austin Weinstock. Joining us for a night at the Brumder Mansion. The Tickets are $25 a person, the Guys will also be sell a group picture sign for $10 during the meet and greet. You can come and start to Mingle and get to know them and the Mansion at 6:30 pm on May 20 then at 7:30 the Paranormal Cops are going to give you a 45 minute Presentation, followed up with Q&A to the Audience. We do have some room avaliable if you would like to spend the night at the Brumder following the event with a chance to see the Cops at Breakfast call Monica Kelly for details 414-218-2202 or email Monica@BrumderMansion.com 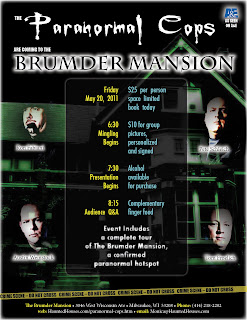 ABOUT THE BRUMDER Located at 3046 West Wisconsin Avenue, in Milwaukee, Wisconsin sits this grand, 4 story, almost 8,000 square feet, 1910 red-bricked Victorian / Gothic / English Arts and Crafts style mansion which surely makes a glorious bed and breakfast. The house has been restored to its former glory. The first floor has all the rooms deemed necessary for a 1910 upper class family, including a parlor, living room, foyer, dining room, ballroom, library, large kitchen etc. The crown jewel in the dining room is the stunning, handcrafted stained glass tile fireplace, designed by Neideken; an interior designer who worked with Frank Lloyd Wright. The main massive Gothic oak staircase takes the visitor up to the second floor and landing, which has 3 bedrooms / suites. Another staircase found on the second floor leads up to what was the servants quarters on the third floor which has 3 rooms and the innkeeper's apartment. There are a total of six guest bed rooms which are used for visitors to the Brumder Bed and Breakfast.

Email ThisBlogThis!Share to TwitterShare to FacebookShare to Pinterest
Labels: Meet the stars of AEs Paranormal Cops TV series at the Haunted Brumder Mansion

Tickets are $10 per person

With influences like Elvis, Carl Perkins,Jerry Lee Lewis, The Stray Cats, & The Ramones. Thus the Scrapyard Daddy's were born.

If you would like to stay at the Brumder Mansion the night of the concert call Monica Kelly to book your room 414-218-2202
Posted by HauntedHouses.com at 10:09 PM No comments:

FIRST TIME IN MILWAUKEE
On June 18 from 10am - 6pm Join us at the Brumder Mansion For the The C.A.S.P.E.R.™ Ghost Hunter Training is an in-depth program, and is applicable to novice and "pro" alike. Casper is written by, and taught by, Paranormal Investigators Kevin Frantz & and author Charles Kennedy RN of Neural Psychology and the Paranormal Investigation! 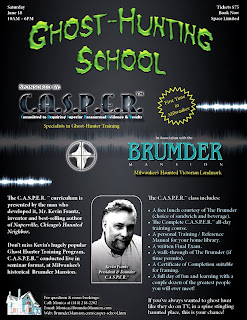 The Class is $75 Per Person Space is Limited


It includes:
* A free lunch at the Brumder Mansion (choice of sandwich and beverage).
* The Complete C.A.S.P.E.R.™ all-day training course
* A personal Training / Reference Manual to take home
* A Written Final Exam
* A Certificate of Completion for framing
&
* A full day of fun and learning with a couple dozen of the greatest people you will ever meet!
If you've always wanted to learn to ghost hunt like they do on TV, in a spine-chilling haunted place, now is your chance!

C.A.S.P.E.R.™ is an acronym that stands for:
Committed to Acquiring Superior Paranormal Evidence & Results

Meet the authors Kevin Frantz of the bestselling book: Naperville, Chicago's Haunted Neighbor and Charles Kennedy RN of Neural Psychology and the Paranormal Investigation: I Know What I Saw, But Was It Reality! After they speak about their books, Kevin Frantz and Charles Kennedy The Space is Limited so be sure to get your tickets at http://casperghostschool.eventbrite.com
We will also have a few rooms open on the 18th if you would like to stay the night at the Brumder Mansion to have "Breakfast with the Authors" call Monica Kelly for details.

THEN IF YOU WOULD LIKE YOU HAVE A SECOND OPTION THAT SAME NIGHT!!!

http://casperauthors.eventbrite.com/ This is to meet the authors learn about there books and then do a Ghost Investigation of the Brumder Mansion from 8pm - 1 am on June 18 then cost is $60

Email ThisBlogThis!Share to TwitterShare to FacebookShare to Pinterest
Labels: C.A.S.P.E.R JUNE 18 GHOST SCHOOL 10-6 $75 with Kevin Frantz at the Brumder mansion in Milwaukee WI

C.A.S.P.E.R JUNE 18 MEET THE AUTHORS AND INVESTIGATION at The Brumder Mansion in Milwaukee WI

Meet the authors Kevin Frantz of the bestselling book: Naperville, Chicago's Haunted Neighbor and Charles Kennedy RN of Neural Psychology and the Paranormal Investigation: I Know What I Saw, But Was It Reality! After they speak about their books, Kevin Frantz and Charles Kennedy will break you up into groups and you will be led on a Ghost Investigation of the Brumder Mansion! The Space is Limited so be sure to get your tickets at http://casperauthors.eventbrite.com


We will also have a few rooms open on the Saturday June 18th 8pm - 1am if you would like to stay the night at the Brumder Mansion to have "Breakfast with the Authors" call Monica Kelly for details. 414/218-2202

Kevin produces and leads one of America's most popular
ghost tours - The Ghost Tour of Naperville, IL.
He is the author of the bestselling book: Naperville, Chicago's Haunted Neighbor.
He has recently received national attention as several of his ghost hunting inventions have
caused a stir. Namely, The Crystal Parabolic EVP Microphone, The Photoflection
Camera, and the world's first real-time EVP recorder: ECHO, as seen on Youtube.

Email ThisBlogThis!Share to TwitterShare to FacebookShare to Pinterest
Labels: C.A.S.P.E.R JUNE 18 MEET THE AUTHORS AND INVESTIGATION at The Brumder Mansion in Milwaukee WI

Amityville Horror — Something evil is determined to make sure no-one lives in this house in Amityville New York, ever again. MORE

Beetlejuice — A deceased couple in limbo makes the mistake of calling on Beetlejuice, an enterprising but shady entity, to evict the annoyingly alive family that has taken over their beloved house after their passing. MORE

Boogeyman — After years of entertaining themselves with the mythical story of the infamous 'Boogeyman", young Tim and his father are about to discover that the Boogeyman is much more than a fable. MORE

Casper — In the small town of Friendship, Maine, there exists an abandoned old house rumored to be haunted. MORE

Cursed — Two girls having their palms read receive frightening prophesies of ill-fated futures they must strive to avoid. MORE

Darkness — Forty years ago something went terribly wrong in a secluded house on a Spanish estate. MORE

1408 — A skeptical debunker of paranormal tales encounters an evil haunted room at a hotel, where no guest lasts longer than an hour. MORE

Ghost — A sentimental love story, a supernatural tale and a murder mystery thriller, with a sprinkling of comedic moments, all uniquely blended to make a superbly entertaining movie. MORE

Ghost Watcher — A scam artist posing as a medium prepares to help Elizabeth banish a spirit from her apartment. MORE

The Grudge — Edge-of-your-seat, cover-your-eyes gotcha moments abound in this unrelenting thriller. You get your popcorn's worth of frights in this intense exploration of the link between haunted places and the violent emotions of those who died there. MORE

Harry Potter 2 — Fighting trees, talking spiders, and danger around every corner. Our intrepid students will need all their skills and wizardry to save their beloved Hogwarts from ruin. MORE

The Haunting (1999) — A remake of its 1963 predecessor, "The Haunting" is a scary, character-driven film that documents the experiences of three patients attempting to uncover the macabre secret of Hill House. MORE

The Others — A superb, spell-binding psychological roller coaster of a movie documenting the life of the isolated mother, Grace Stewart, and her two severely ill-children Anne and Nicholas. MORE

The Legend of Hell House — After being paid an enormous sum of money, a psychic research team foolishly enters a haunted mansion to study the evil presences lurking inside. MORE

House On Haunted Hill — A remake of the cult classic horror film about a group of guests mysteriously invited to a party thrown by a millionaire offering a most unusual and macabre prize. MORE

The Lovely Bones — The story of a life cut short by early death, and everything that comes after. A 14 year old girl is murdered by a serial killer and she can hang on to her ghostly existence, ever so sweetly. She can watch over her family and frolic in an afterlife wonderfully imagined by director Peter Jackson and his magicians at WETA. MORE

The Messengers — A family moves to a haunted farmhouse.
MORE

Paranormal Activity — A young couple, Katie and Micah, believe their trendy house is haunted and go about filming it with a video camera. MORE

Pirates of the Caribbean — In the 17th century, there once lived a nefarious pirate, Captain Jack Sparrow, his swashbuckling sidekick Will Turner, and the lovely Elizabeth Swann. As they pursue the cursed ship, the Black Pearl, they risk life and limb at the hands of the villainous Captain Barbossa. MORE

Poltergeist — A storm erupts, a spooky looking tree menaces a young boy, and a young girl is sucked into a paranormal world. These are just some of the adventures Tobe Hooper and Steven Spielberg have in store for the Freeling family. MORE

The Ring — A one-of-a-kind psychological thriller that will have you on the edge of your seat as the malignant mystery of a a deadly videotape claims one victim after another. MORE

Secret Window — Come along for the ride, for the many twists and turns through the warped life and mind of a tormented writer suffering from more than just writer's block. MORE

The Shunned House — When a reporter ventures into an old house in search of a story, he gets three of them. MORE

Stir of Echoes — The harrowing story of the Witzky family as they are drawn into a murder mystery that surfaces when father and son duo Tom and Jake Witzky begin to communicate with the dead. MORE

Sleepy Hollow — Constable Ichabod Crane (Johnny Depp) is an innovative scientist amidst the corrupt society of New York, circa 1799. As the dawn of the 19th century approaches, Crane is ordered to practice his forensic brand of sleuthing in the quaint town of Sleepy Hollow. MORE

Thir13en Ghosts — The story of one man's quest to construct a machine that will allow him to see into the eye of hell. The catch? The contraption requires the spirits of twelve specific ghosts to serve as power supplies for the machine. MORE

What Lies Beneath — As her university-professor husband leaves for a weekend conference, strange things begin to happen in Claire's new house. Is she losing her mind? Or are more sinister forces at work. MORE

White Noise — Can the dead continue to communicate with the living once they've passed into another realm? Are you sure you want to know? MORE

Join a Ghost Hunting Investigation at the historic Brumder Mansion!

Photos and pictures of real haunted houses
Posted by HauntedHouses.com at 9:34 PM No comments: